Is there anybody there?: Working without the other actors

May 1, 2020
Acting, Behind the Scenes, Book Extracts, Industry Advice 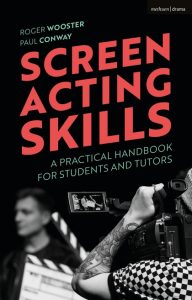 In January we published Screen Acting Skills by Roger Wooster and Paul Conway. Filled with advice and practical, low-tech screen acting exercises, it’s the ideal guide if you’re preparing to work in the industry.

In this exclusive extract from the book, Roger and Paul talk you through a timely exercise on how to work without other actors around.

The camera lens is the eyeline you work with, so if you need to be looking to the left or the right of camera, use the lens as your guide and not the size of the room. Everything is made larger through the lens, so don’t use the room as your eyeline. Stick close to the lens! – Debbie Bridge, actor

From cheating spatial relationships, we turn in this exercise to having to work with actors who are not there. A particular shot may, for example, require the recipient of the line to be absent to allow the camera to obtain the desired angle. The dialogue may be fed in from nearby or may be absent altogether, which will require the actor to respond ‘as if’ the feed line had been delivered. For the theatre actor there will always be someone to bounce your performance off, but frequently when shooting a scene you may be acting alone. You may be acting opposite an actor who is on another continent, or who has gone to the bar, or you may be staring into the eyes of a savage monster that will be CGI-ed into the scene later. Such requirements make huge demands of the screen actor’s mastery of all his screen acting skills.

For these exercises it is helpful if actors have memorized a section of script. First of all shoot the scene in a head-and shoulders two-shot. Then, for the close-ups, remove one of the actors and replace him with the camera. Note that usually the actor being shot should not look into the lens of the camera but to an appropriate eyeline to the side of the camera. There are several challenges here for the actor:

Variations on Exercise 9:3. If facilities permit, this exercise can be tried out using other camera angles (paying appropriate attention to health and safety please!):