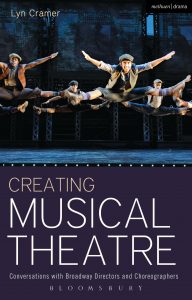 This interview is an excerpt taken from Creating Musical Theatre: Conversations with Broadway Directors and Choreographers (2013), by Lyn Cramer.

CRAMER: I want to ask you about choreographic approach. You talk about through-line versus texturing. Would you explain what you mean by that?

BLANKENBUEHLER: I view a lot of choreography as impressionist painting. So, when you see such a painting, your eye is forced to go to the focal point, and that’s what happens in musical staging and choreography. Your eye should be forced to go to a focal point. If it’s not, there’s usually a problem. Sometimes you don’t want to know where to look because that mayhem makes the focus resonate. In general, you want to have a focal point. What’s around the focal point tells the audience how to feel about the focal point, and that’s what the artist says in an impressionist painting. That’s what I view as texture. Focus is the narrative line. So, let’s say the guy takes the girl, kisses her goodnight, and she goes into the door. It’s an amazing first date, so he’s about to sing “Singing in the Rain” or something. That’s direct. That’s through-line and that’s what you want to see. However, the world around that scene can tell you how he’s feeling. I’ll make something up. Let’s say that the world around the couple are dancers in the park like Band Wagon’s, “Dancing in the Dark.” None of the girls are touching the ground. The whole stage is filled with girls just floating, and the guys are hovering underneath them. You know how the lovers feel. The lovers are not touching the ground. If I’ve done my job well, I’m not looking at the other dancers. I’m only looking at the focal point, the couple, or the man about to sing. However, my brain is taking in the feeling around them, and that’s what I call texture.

CRAMER: You were able to choreograph Apple Tree at City Center Encores! and then it moved to Broadway. In the Heights started off-Broadway and also moved. When you have the opportunity to improve your work, does it change dramatically?

BLANKENBUEHLER: Apple Tree is not such a good example because I did improve it a great deal on my side. We had so much more time to improve it when we were in rehearsals for Broadway compared to prepping for Encores! In the Heights was the life-altering experience so they are not comparative. I’ll tell you, this is the bittersweet lesson that I learned. We all can’t do the job that we want to do; not unlike the project I’m working on right now, entitled The People in the Picture. I’m only really content and happy when I’m working on a piece that at its core must dance. My current project does not.

CRAMER: In other words, dance must be the most important component?

BLANKENBUEHLER: That’s the bottom line. I do not want to do shows that are not about dance. So as I become a director-choreographer, the dance isn’t becoming less important and the directing becoming important, quite the contrary. I’m only going to direct shows where dance takes the lead.

CRAMER: Bring It On! just opened at the Alliance Theatre in Atlanta in January, and is moving to Los Angeles, then touring, and finally Broadway bound. You directed and choreographed the show. Will you continue to work in both capacities?

BLANKENBUEHLER: Yes and no. People love to declare, “Oh, you’re going to be a director-choreographer,” and I say, “Yes, but I’m not really ready yet.” I would like to continue learning, so I’m going to be going to work on the revival of Annie with director James Lapine. It’s a big dance show, but it’s not about dancing. It’s about raw emotion and visceral enough to be communicated through dance. Next, I’m choreographing a brand new Peter Pan and I am quite sure it’s going to be extraordinary. The music embraces a hip-hop and rock style. It possesses the energy of a kid, or young adult, with characteristics of courage, inspiration, and determination. All those things demand dance. Those are the projects I seek. When the music plays, I’m going to do my best as a choreographer to translate the lyrics. When you close your eyes and listen to an orchestration, the music should deliver the whole emotional world because of what you’re hearing. If it doesn’t, there’s a problem. I think the difficulty in musical theatre lies in overchoreographing or underchoreographing a show.

CRAMER: For our readers, Lin-Manuel Miranda is the composer of In the Heights and Bring It On!

BLANKENBUEHLER: I don’t understand how he does it, but no matter what he writes, it dances. His music has soul and life to it, and I’d have to be an idiot not to choreograph to every note. One of the reasons the show works is because the music and dance departments are on the same level. One effectively cannot exist without the other.

CRAMER: When you teach your choreography for In the Heights, you teach using the lyrics, scatting (ba ba do bop), and through visualizing movement, such as “you’re down into the earth on this section.” When I watched the video clips of this instruction, it was easy to understand exactly what you wanted. Our readers should know that you are still actively teaching in the classroom. You are a guest teacher on national convention circuits and at Broadway Dance Center in New York City. My question is, do you teach the same way, whether in class, or on a show?

BLANKENBUEHLER: Dancers get frustrated when they don’t know what they’re doing, so I always count everything. I can say to a student, “The foot’s on the end of four,” but that’s just math. That’s not important. What’s important is why it’s there. I taught an audition all day yesterday, and there were dancers claiming they didn’t understand, so I had to count, one and a two and three and a four. But then it’s really important for them to understand how they’re doing it, so, I have to say the lyric or hum it musically. That’s why I scat a lot. What I’ve learned in the past couple years is that I tend to choreograph from a rhythmic place, not necessarily a text place. So, it only works really well if the rhythmic world already matches the text world. I’m not going to disregard the text; I still have to communicate that, but what moves me is rhythm. When I’m teaching I always say to students, musicality isn’t about counting music; it’s the energy that matches the rhythm and meets the accent. Remember, I was a kid watching Fantasia . I’m coming from that world, so I see colors in music. I visualize the old stereo system where you would watch the sound waves on the receiver. That’s how I see the rhythm and the movement. I see that peak, and then I know the valley’s not important. So, when I decide to hit something with an accent, it’s the syncopation on either side that makes it interesting.